Turns out strapping a weight to your chest sucks. Other than every woman ever, who knew?

After lugging it around Iceland, New York, DC, San Francisco, and all points in-between, through tundra and subway tunnel and wooded forest and concrete sidewalk, it’s become clear that 50+ lbs of gear is just too much for my bag of bones to handle. I thought it’d be easier since the load was split across two bags, but that just gave me two cumbersome weights to deal with instead of one.

The other problem to carrying that much weight is that it would’ve made long hikes exponentially more difficult. Either I bring all 50+ lbs with me on the trail or separate my non-essentials and either mail them ahead or leave them behind to be collected later. None of those options sounded very appealing, so the weight had to go.

Getting the weight down took more than just replacing some items with lighter (pricier) versions of themselves, it required some fundamental changes to my camping plan that—if I’m being honest—I’m still on the fence about. Three months in Europe and a few weeks on trails will be a good litmus test for the new setup. 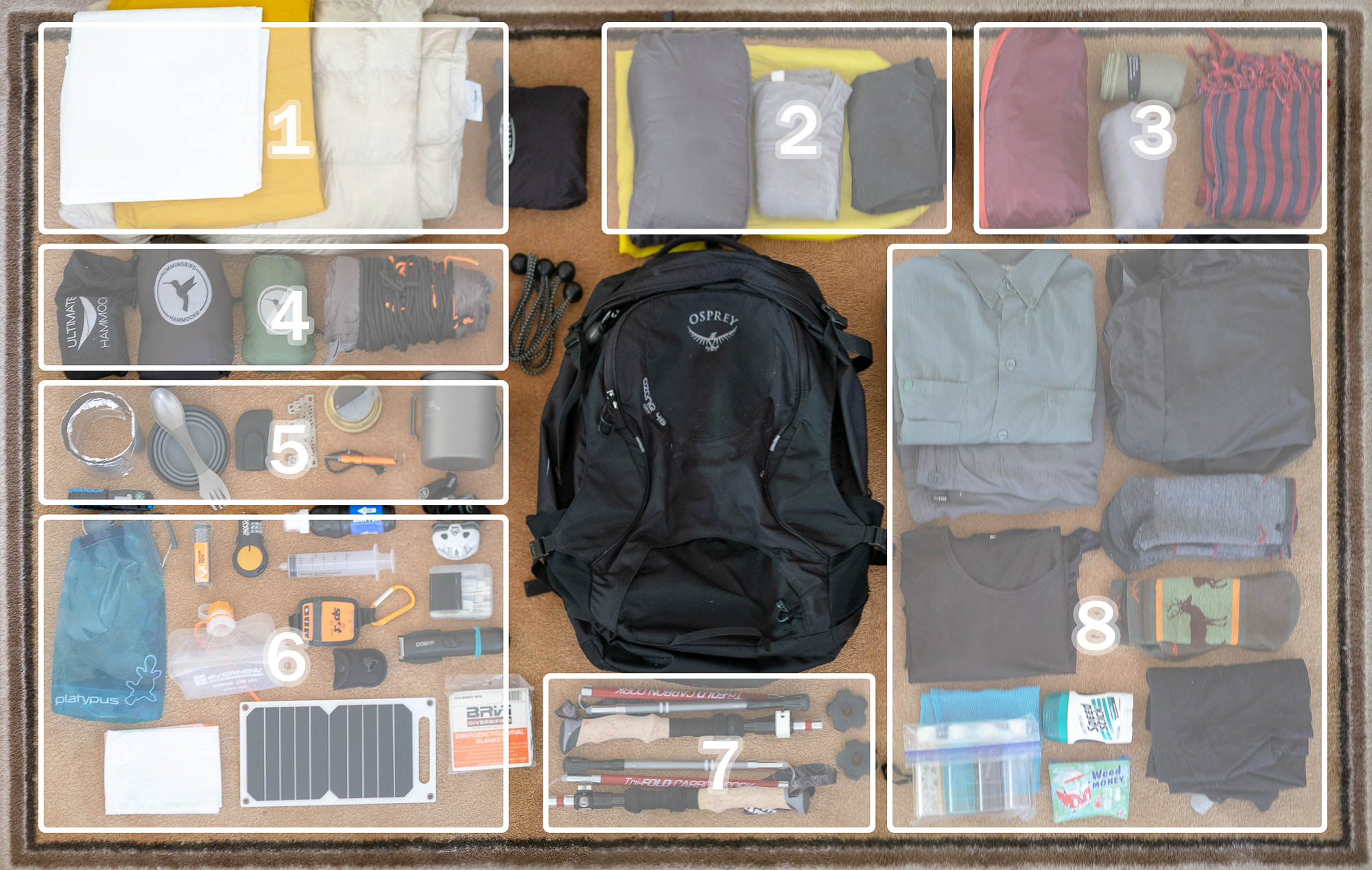 Not only is it ten pounds lighter, I also freed up enough space that it doesn’t feel like a balloon ready to pop.[/caption]

I replaced my big Teton mummy bag with a goose down envelope sleeping bag and left my sleeping bag liner behind. Doing so loses me about 20-25 degrees of warmth, but I get some of that back with my sleeping pad upgrade. My Tyvek ground cloth should also help trap a little heat, though it probably won’t be much.

In the end I’m probably only good to the low 40s instead of the low 20s, but I honestly wasn’t going to be cold camping anyway. Meanwhile I freed up a ton of space, especially since I’m now just stuffing the sleeping bag directly into my pack, letting it fill the nooks and crannies, rather than balling it up in a compression sack and trying to find room for it.

[2] To help compensate for the sleeping bag liner I ditched, I added a long-sleeved shirt and long johns that I can sleep in if it gets cold. They’re not much bulkier or heavier, but I can wear them anytime whereas the liner was only good for sleeping. I doubt I’ll need them much, but when I do I’ll be glad I have them.

[3] I likewise got rid of my old towel and replaced it with an even smaller one roughly the size of a dish towel. Every little bit of savings counts, and I can dry myself just as well with a medium-sized towel as a large one. And if I need a headwrap or sari, I’ve got my krama scarf for that.

The “fundamental change” I was talking about was ditching my tent entirely and going all-in with my hammock. Hammocks give me much better sleeps for much less encumbrance, but they kinda need something to hang from. And while I was able to find places to hang when I was walking Scotland, in the two weeks I was in Iceland I didn’t see a single decent tree.

The upside is that if there’s really nowhere to hang, I can always fashion a tarp tent with my trekking poles [7]. It won’t be the warmest of options (tarp tents don’t really close up like traditional tents do), but hopefully I won’t need it much. Guess I’ll find out soon enough!

I replaced my cook set completely, ditching my heavy wood-burning stove for an ultralight alcohol one. I loved the idea of a stove that smokelessly double-burned wood since it didn’t require carrying fuel around with you, but my Iceland trip quickly reminded me that usable kindling isn’t always easy to find (in two weeks I didn’t wood-burn once).

Meanwhile even with a week’s worth of alcohol fuel, the new set still comes out an entire pound lighter than the old setup, a king’s ransom in pack weight.  The lighter pot also boils quicker, which helps save fuel (on average it takes half an ounce of alcohol per cook).

My odds & ends didn’t change that much beyond replacing my filter straw with a more convenient squeeze filter and adding a Spot Personal Locator Beacon (basically 911 for backpackers). The Nalgene also went bye-bye, replaced by a much lighter-weight waterskin.

One change I’m a little leery about was swapping my pack rain cover for a trash bag (the white square), a move suggested by ultralighters. The premise is that you use it to line your pack rather than cover it, but I suspect that works better for people using ultralight packs, which often don’t have external pockets. I’ll have to remember to not keep anything water-damageable in the outer pocket.

[7] Carbon fiber trekking poles, a godsend on any long hike. These are almost “negative weight” items because they only weigh one pound together, meanwhile trekking poles significantly reduce leg strain when hiking. They also double as tent poles for when I need to fashion a tarp tent.

[8] My wardrobe is more or less the same. I ditched a pair of socks and a shirt and added a reversible fall jacket for when it’s too chilly for just a tee, but not quite cold enough for a puffy. Otherwise not much has changed.

This one was the tougher pack to slim down. If my Camp Bag is for living, then my Gear Bag is for working and playing, which makes the sacrifices all the more personal. But at least the sacrifices weren’t in vain; I managed to cut the pack weight in half, which is a huge coup considering this is the pack I wear on my chest. 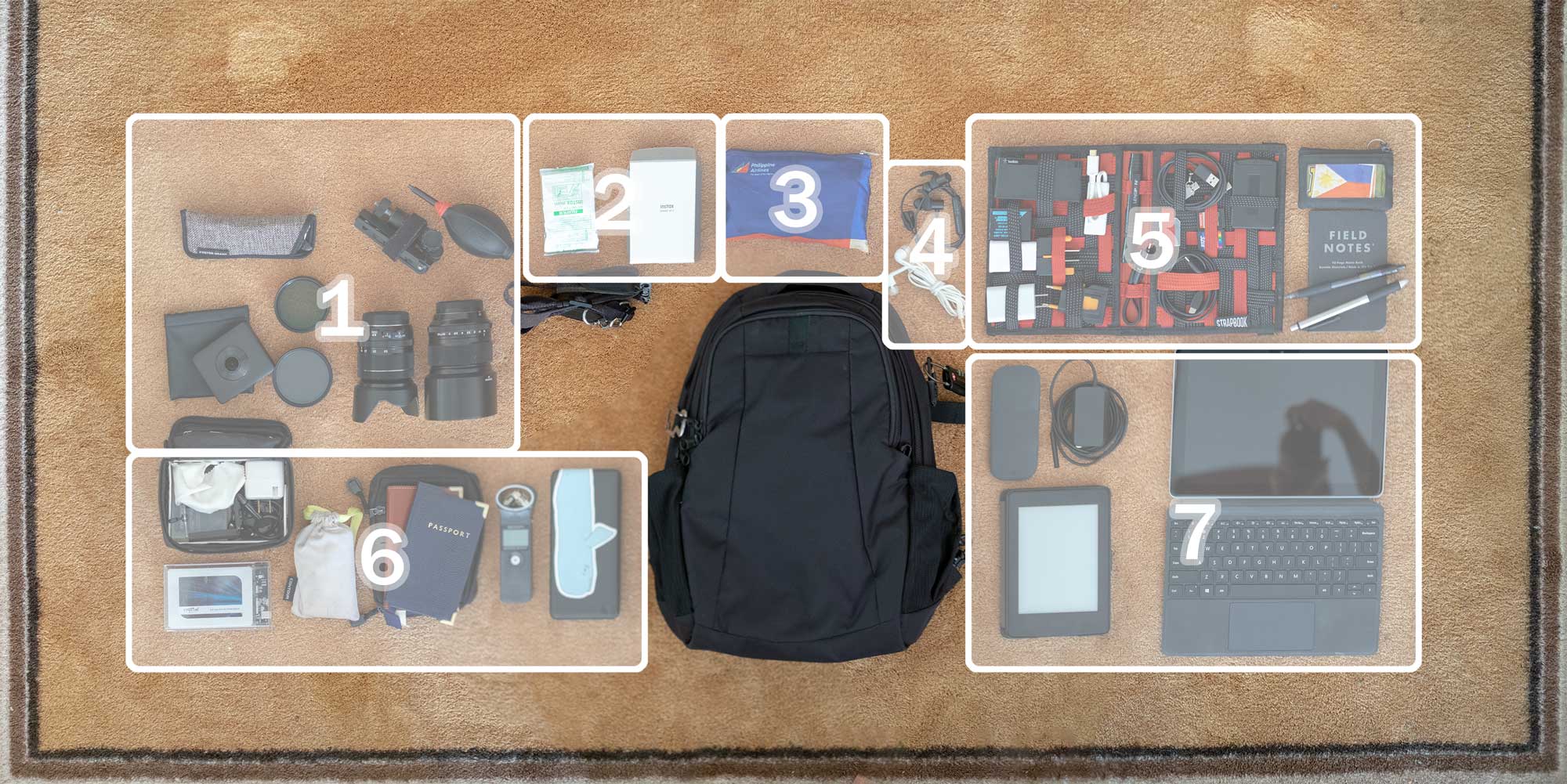 Unexpected Downside: My torso gets super sweaty after just a few minutes of hiking in the sun with this on.[/caption]

The toughest sacrifice was probably leaving my Nintendo Switch at home. This may seem like a silly no-brainer (who brings a game system traveling?), but this isn’t just a quick holiday I’m looking at, it’s a full year or two on the road.

Considering how much I’ve used it over the last few months, the thought of going without my Switch for two years makes my thumbs sad. In the end, though, it had to stay home. There’ll be plenty of time for video games later. For now, adventure.

Trimming my camera gear meant reassessing my photo priorities. I hardly used my ultrawide lens, for example, so I sold it and replaced it with a much cheaper Moment lens for my phone. The Pixel 2 has a stellar camera, and so long as I’m not shooting in low-light, the images are fantastic. I also prefer prime lenses to zooms, so my lead-heavy 24-70/2.8 was sold and replaced with a much lighter 24-70/2.8–4.0. My old lens had better image quality, sure, but it was also twice as heavy. Forget that.

I also ditched the tripod, which was tough. It helped me capture so many great shots in Iceland that would’ve been near-impossible to get without it, but it’s just too damned cumbersome. I’ve managed to get by with just my pocket tripod in the past; I can do it again.

[2] One addition to my pack was the return of an old favorite, the Fuji Instax printer! My old Instax had been responsible for so many fond travel mementos—and memories —that I just had to bring one with me again. I picked up the updated version of the printer, which can charge off USB (the old version used CR2 batteries that were impossible to find outside the U.S.). There’s no room for anything in my pack that can’t charge off USB.

[3] Considering that my “toiletry kit” consists entirely of a toothbrush, toothpaste, earplugs, and a nail cutter, there really isn’t much room for cutting weight.

[5] By ditching redundant items (like my extra card readers or the shutter release cable that can be replaced by a camera remote phone app) and moving my lens filters, I was able to cut out an entire Strapbook’s worth of stuff, which had a significant impact on reducing pack size.

[6] The other thing that helped lighten the Strapbook load was clearing out some stuff from my Rando Box so that I had space for runoff. Gone are my action camera, SD card backup device, and hard drive cable. The security lock, meanwhile, now just hangs off my bag. This freed up enough space to move in my 3-outlet tap and a few other things. I wish I could ditch my powerbank, but with the amount of time I spend away from outlets, it’s a necessity.

Probably the biggest change in my Gear Bag, I sold both my 2015 Macbook and Samsung tablet and replaced them instead with a just-released Surface Go. The Go is a weaker computer than my old laptop (which itself was already a big step down from my 2013 Macbook Pro), but the form factor and portability are the best I’ve ever found among any of the (many) computers I’ve taken with my on my travels over the years. It does require a mouse because the trackpad is overwhelmingly meh, but it’s still worth it (and the Arc Mouse is so futuristic that I love using it).

The Kindle stays because books.

If only I could shed twenty pounds just as easily

I know I’ll miss a few things—like my tripod on this Corfu hike and my Nintendo Switch in general—but I can’t deny that twenty pounds is a lot to cut from my pack. Hell, truth be told it’s still not enough. I’m going to have to stash a few non-essentials before I go on my hike because my Gear Bag is still too heavy to carry on my chest comfortably. Thankfully Corfu is an island and I’ll be entering and exiting it the same way, so I can easily store and come back for it.

Regardless, if I wanna do more (or longer) hikes, I’ll need to either cut out more weight or shift it to my back because I could not do 20-mile days with this loadout.