I was excited when I first heard of the Temple of Leah, called “Cebu’s Taj Mahal,” one man’s (garish) monument to his deceased beloved. If there’s one thing that Filipinos are great at, it’s … unconventional … design choices. Bound by neither awareness of nor regard for the basic rules of style, Pinoys can get a little crazy with the cheezwiz sometime.

Naturally, I had to see it. 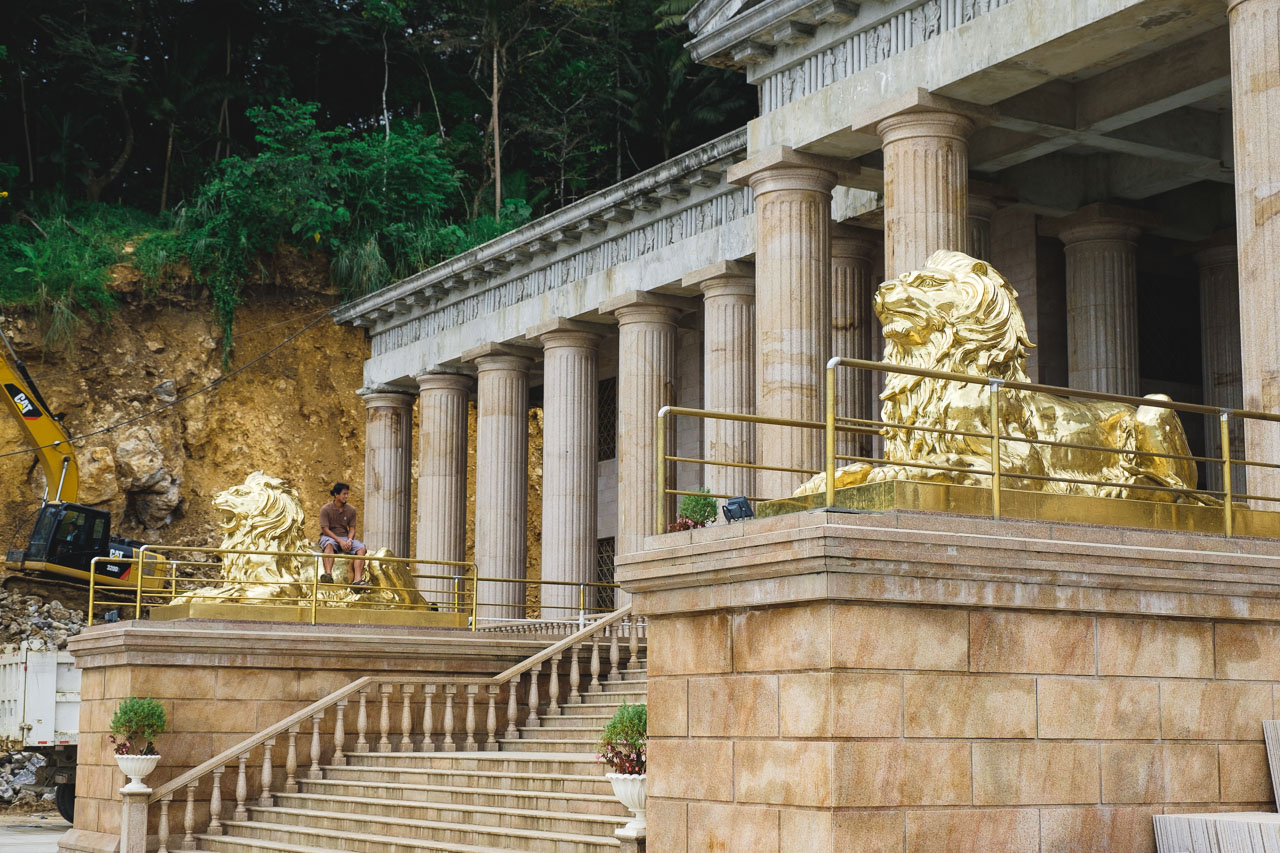 I love how the cheap steel pipe barriers are painted gold. It’s that kind of attention to detail that really makes a place like this.

Of course, “had to see it” basically translated to “put it off until the last possible moment” and, despite having lived here for the better part of the last year-and-a-half, it was only on my last week here there I finally managed to drag myself to it. After a year of waiting, I finally got to see the fabled spot.

And what a let-down it was.

Take a good, long look at this massive barren courtyard — it’s one of the only two things you’re allowed to actually see. 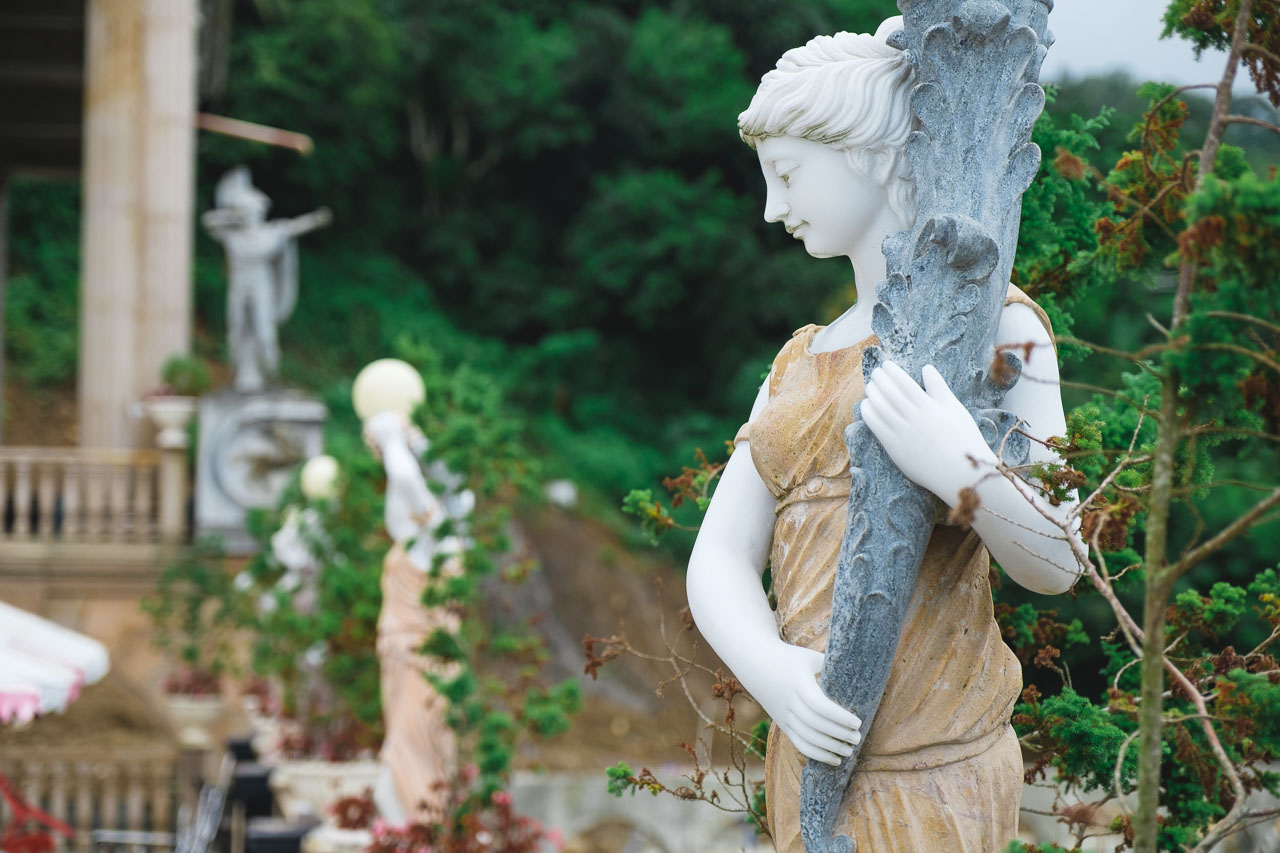 The courtyard is lined with faux-Roman sculptures that all curiously have pupils despite the fact that Roman statues didn’t. Go figure.

Not because it wasn’t as grand and imposing and utterly tacky (it was all those things and more), but because there was nothing to actually *see*. For their ₱50, visitors get access to the courtyard and the entryway, but nothing else. All the side doors are locked, preventing anyone from seeing the rest of the oversized memorial.

Imagine going to Disney Land and not being allowed to leave Main Street. 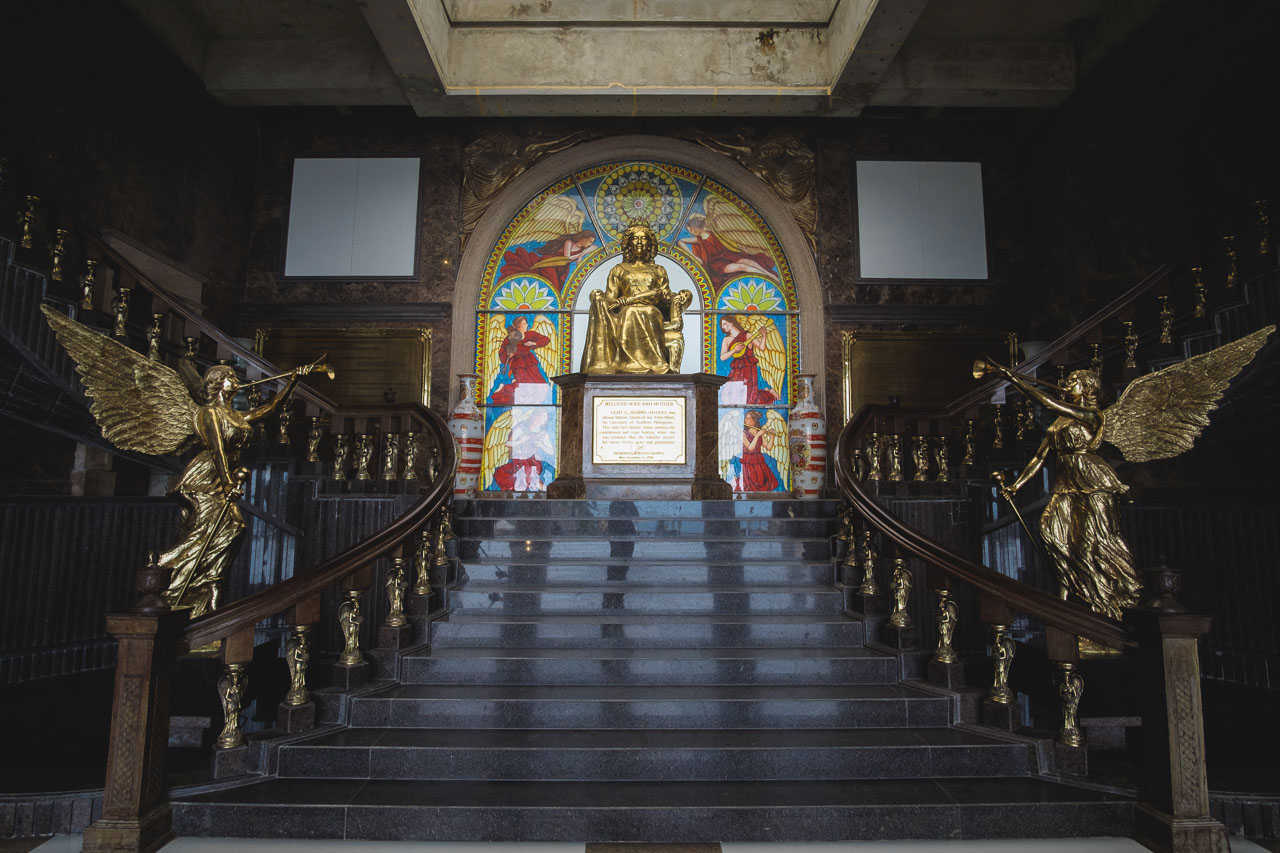 The entryway is as grand and gaudy as one could hope, and the only other place you’re allowed to visit. The other 90% of the huge structure is completely off-limits.

I do have to admit, though, that this photo below is one of the funniest things I’ve seen in a long time and alone was worth the price of admission. 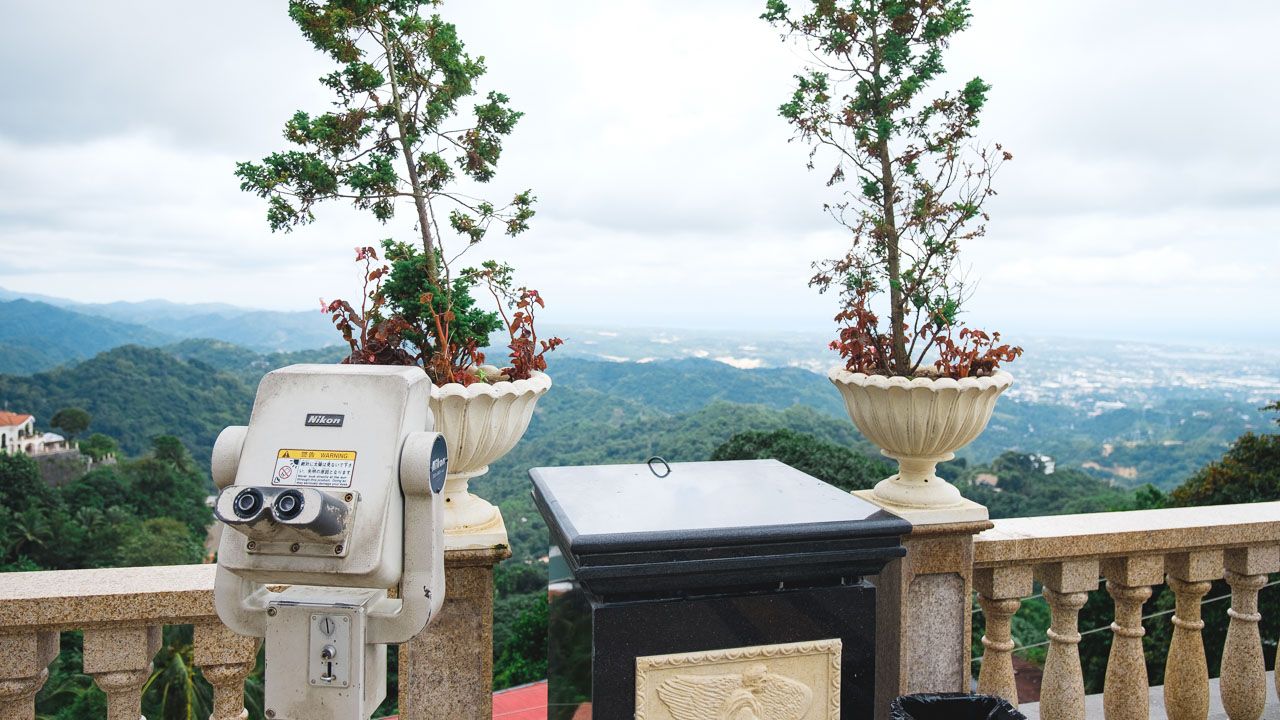 Given a courtyard so absurdly large you could land a fleet of helicopters at the same time, and grand, sweeping views of Cebu, Mactan, Olango, an even Bohol, the genius designers chose to place the only pair of binoculars behind a huge potted plant.

I couldn’t write a better joke.

Unintentional humor aside, it was still a big disappointment to not be able to explore the very place you paid good money to see. The site was clearly in use, seemingly as a museum-slash-bodega for numerous catalogued art pieces. How easy it would be for them to open the doors and turn the whole place into an actual museum (something the Philippines sorely lacks). Instead they keep the doors shut and the various pieces within locked away from the public, secured behind gold-painted iron bars. 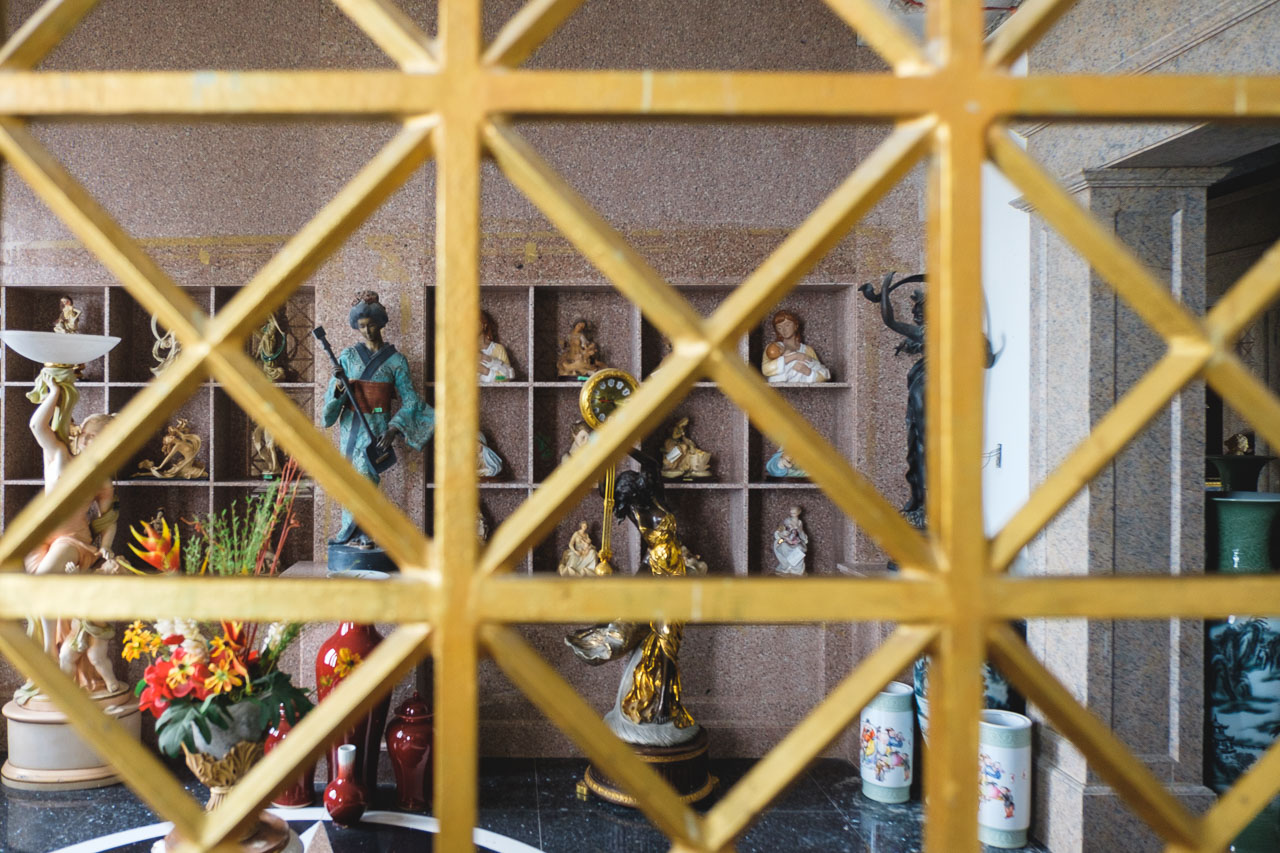 Each item is a carefully-catalogued art piece, completely inaccessible to the public, with more down the halls. Admittedly most look pretty tacky, but it’d still be nice to be able to peruse them.

To be honest, I can’t really be surprised by it. Ours is not a philanthropic society, and it’s no coincidence that the Philippines has a large deficit of museums. It’s not for a lack of art or history, nor the remnants of either, it’s the fact that those remnants live almost entirely in the private collections of the rich. Somewhere else, we might see those pieces on display at a national gallery or museum of natural history. Instead, no one sees them except for the owners and those close to them.

Maybe one day, Teodorico Adarna will open more of the temple to visitors. Maybe he’ll let them walk through the rest of the rooms and view the art therein. And maybe he’ll get someone from the ever-present construction crew to move the binoculars to a spot where they’d do some good. 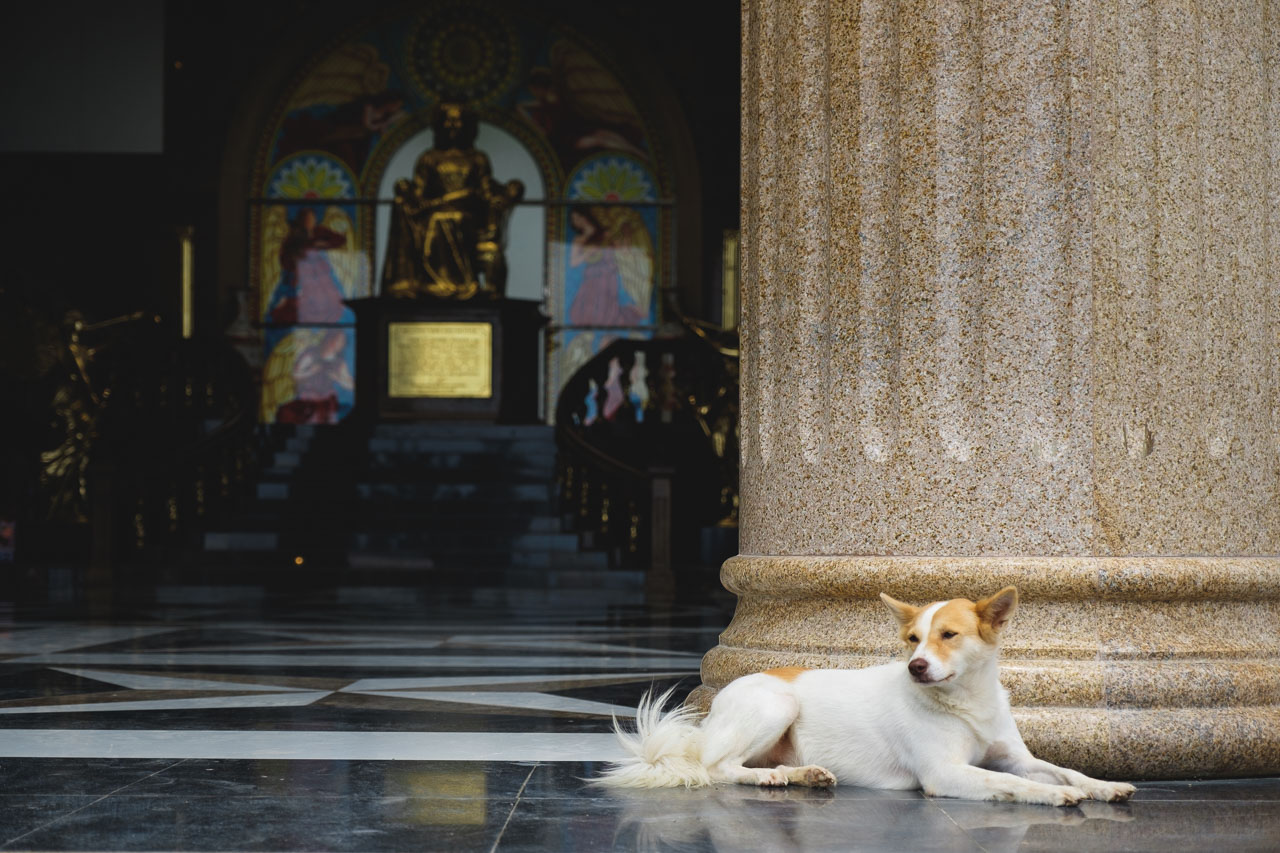