The trick to taking it all with you is not having a lot of “all” to begin with.

I’m back on the road, this time for at least a year or two of various-length stays; a week here, a month there, a day somewhere else. My destinations are equally TBD, but climate range will mostly be 3-seasons because the cold can go eat a dick.

Packing for a trip like this can be tricky enough as it is, but I also plan on doing a lot of camping and picture-taking, so I needed to be equipped for both. And, because there’s no challenge I can’t make more difficult, all of it needed to  all fit in carryon luggage.

After exhaustive searching for a carryon-sized backpack, it ultimately came down to the Osprey Ozone 46L and Porter 46L. I loved the sleek design and suitcase-style opening of the Porter, but the lack of side pockets and a footlocker made it less suited for outdoorsy stuff. If I weren’t planning on doing any camping or hiking, it’d be perfect. But as I plan on hitting the back country, the Ozone was the better fit. 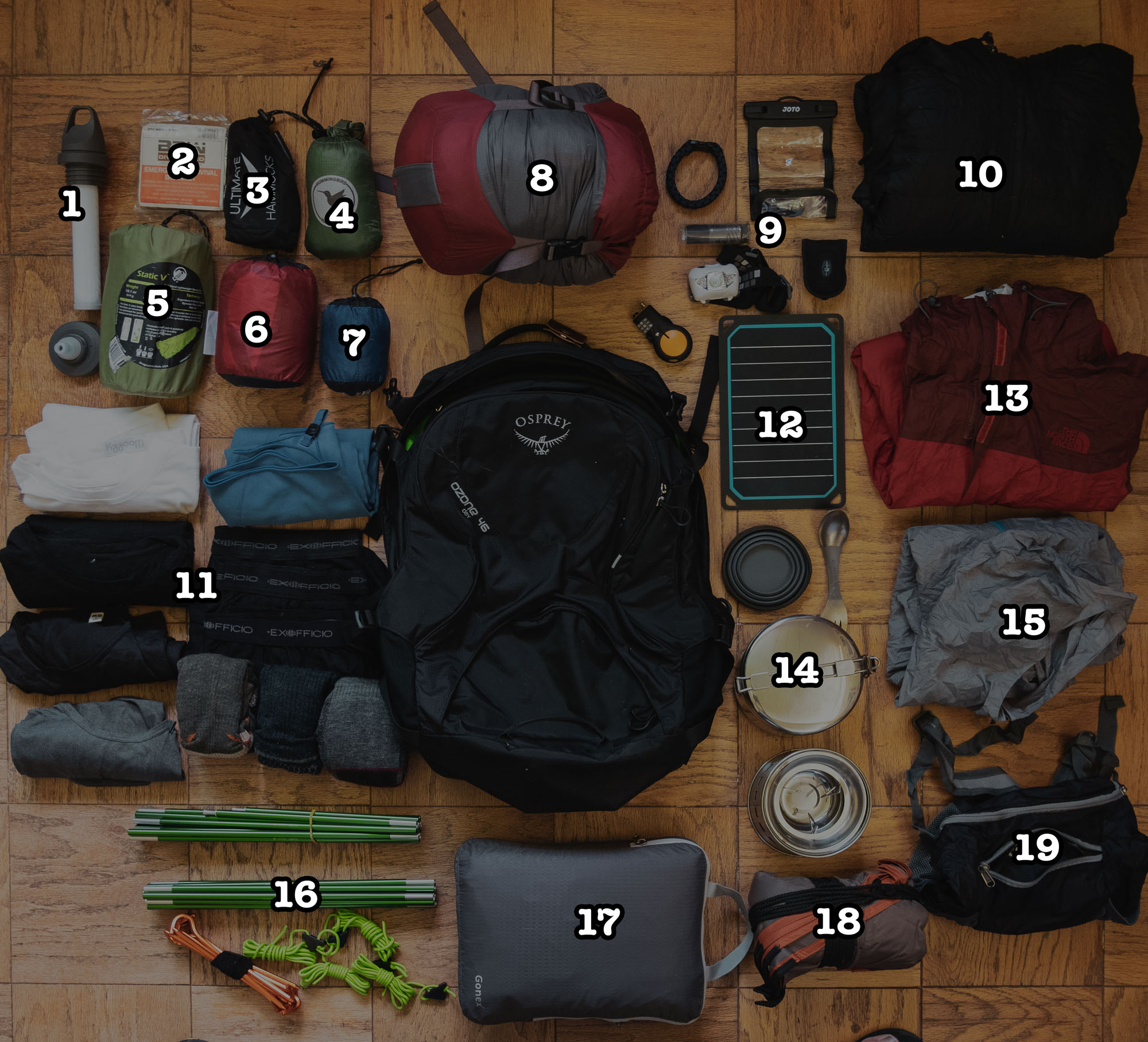 Since taking this picture, I’ve added: a 1L Nalgene bottle, a 1L Platypus waterskin, a pair of REI convertible pants, a Columbia travel shirt, and a pair of board shorts.[/caption]

This one took some searching as the gear bag needed to fit beneath the plane seat in order to qualify as a “personal item” — a max size of 18″ x 13″ x 8″ or so. Thing is, people prefer not to look like turtles, so most backpacks max out at 5″ or 6″ deep, which wastes precious vertical space.

Thankfully, I found a bag the perfect size (and price) in the AmazonBasics DSLR & Laptop Backpack. It was practically built to spec and fit everything I could throw at it and then some. I won’t go into it too much here, but watch my review for more info.

It’s basically a portable locker you can partition out.[/caption] 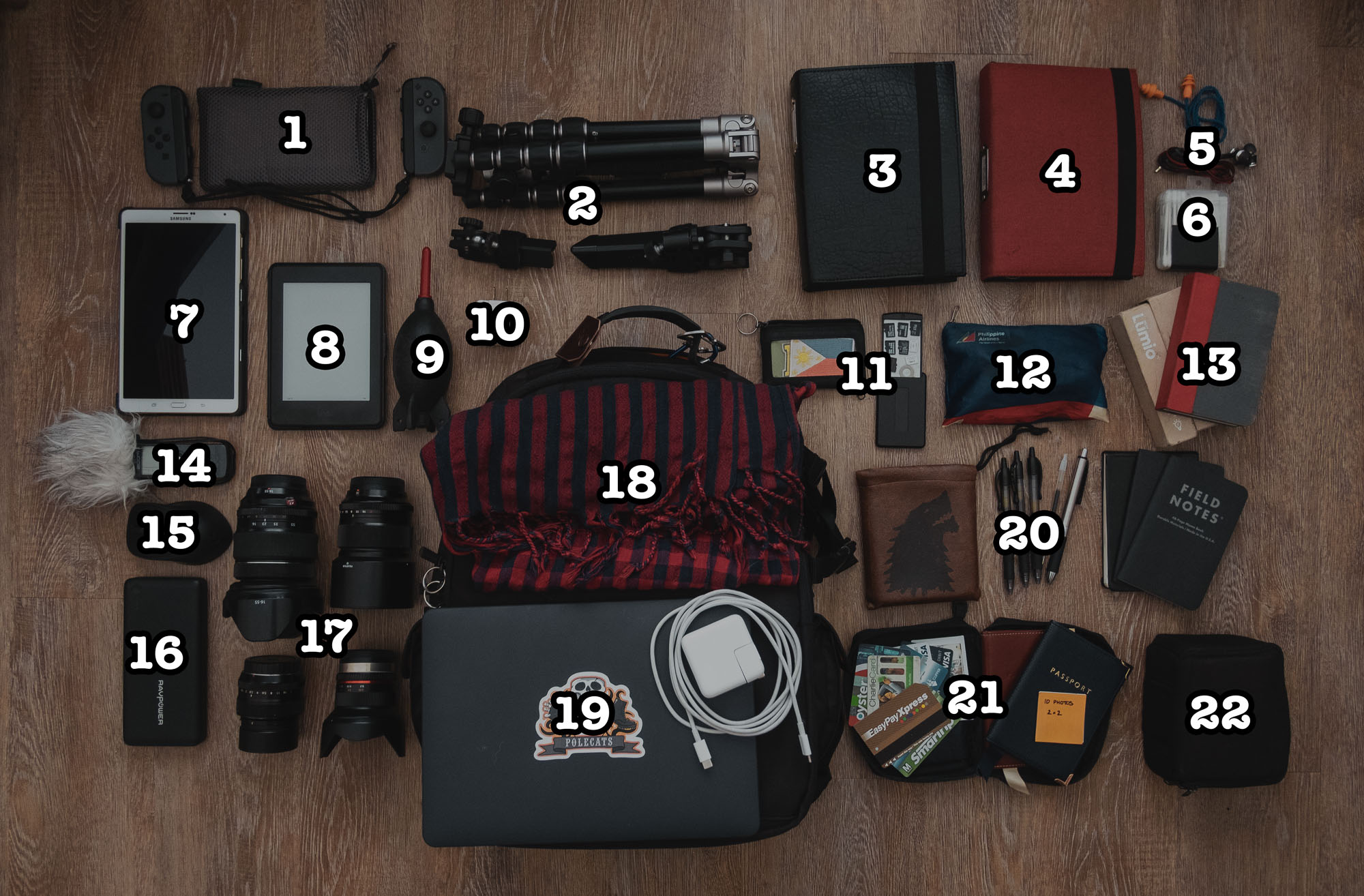 This is only half the picture. So many bits and bobs are filed away in the Strapbooks (3 & 4) and the Rando Box (22)[/caption]

The Catch-22 to these fantastic bags is that what makes them great—the fact that they’re really just large pockets with shoulder straps—also makes them tricky for smaller items. They both offer front panels with smaller pockets for items and the AmazonBasics pack lets you partition it out with velcro dividers, but I travel with a lot of small items and those features weren’t enough.

That’s where containers come in. Between two Strapbooks and one old lens case, I’m able to corral my menagerie of chargers, cables, filters, and a million other things.

(No clue what a Strapbook is? Have I got a video for you!) 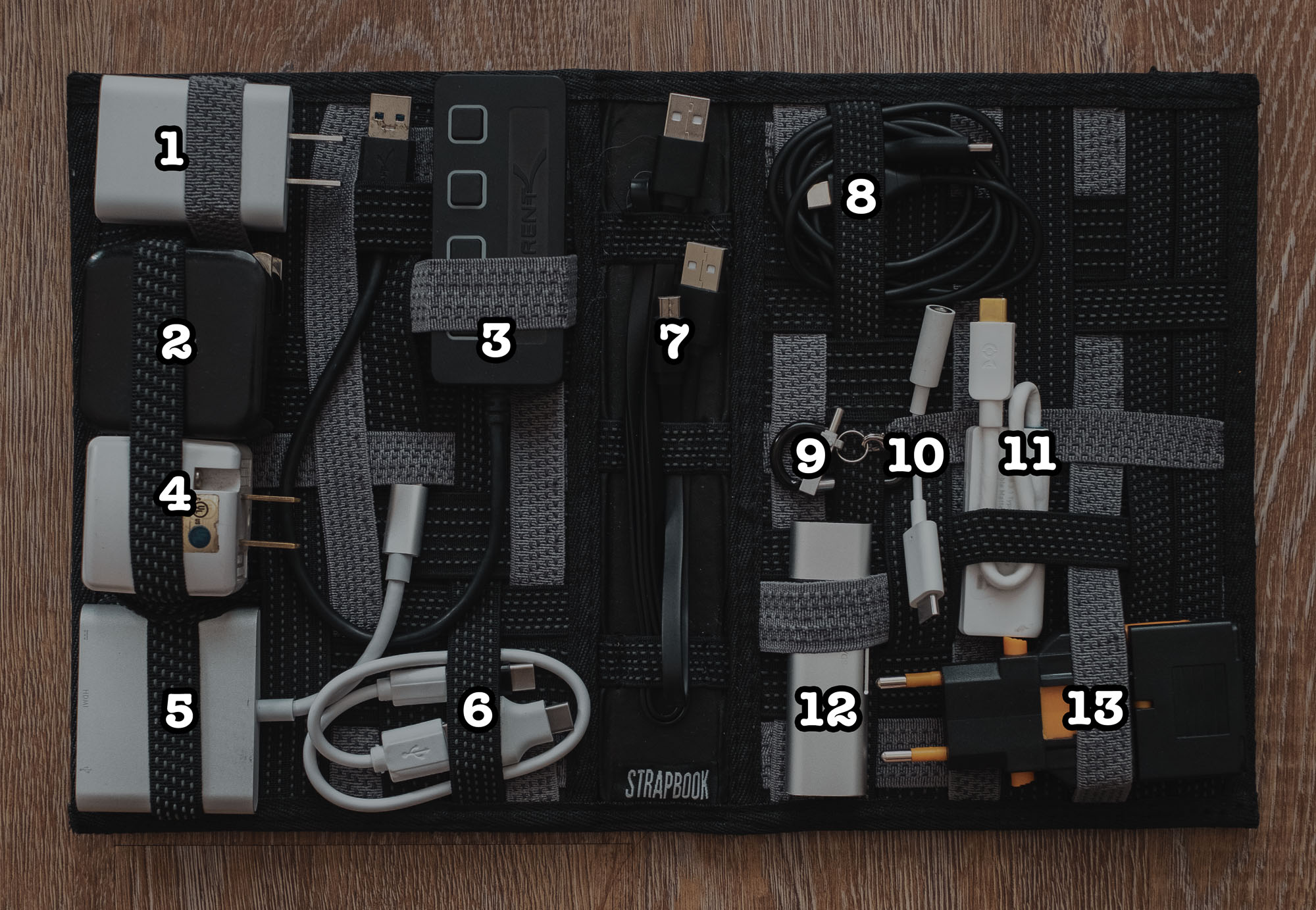 So many devices, so many different connector types and batteries and needs. Thank god for my Tech Book keeping them wrangled in one place.[/caption] 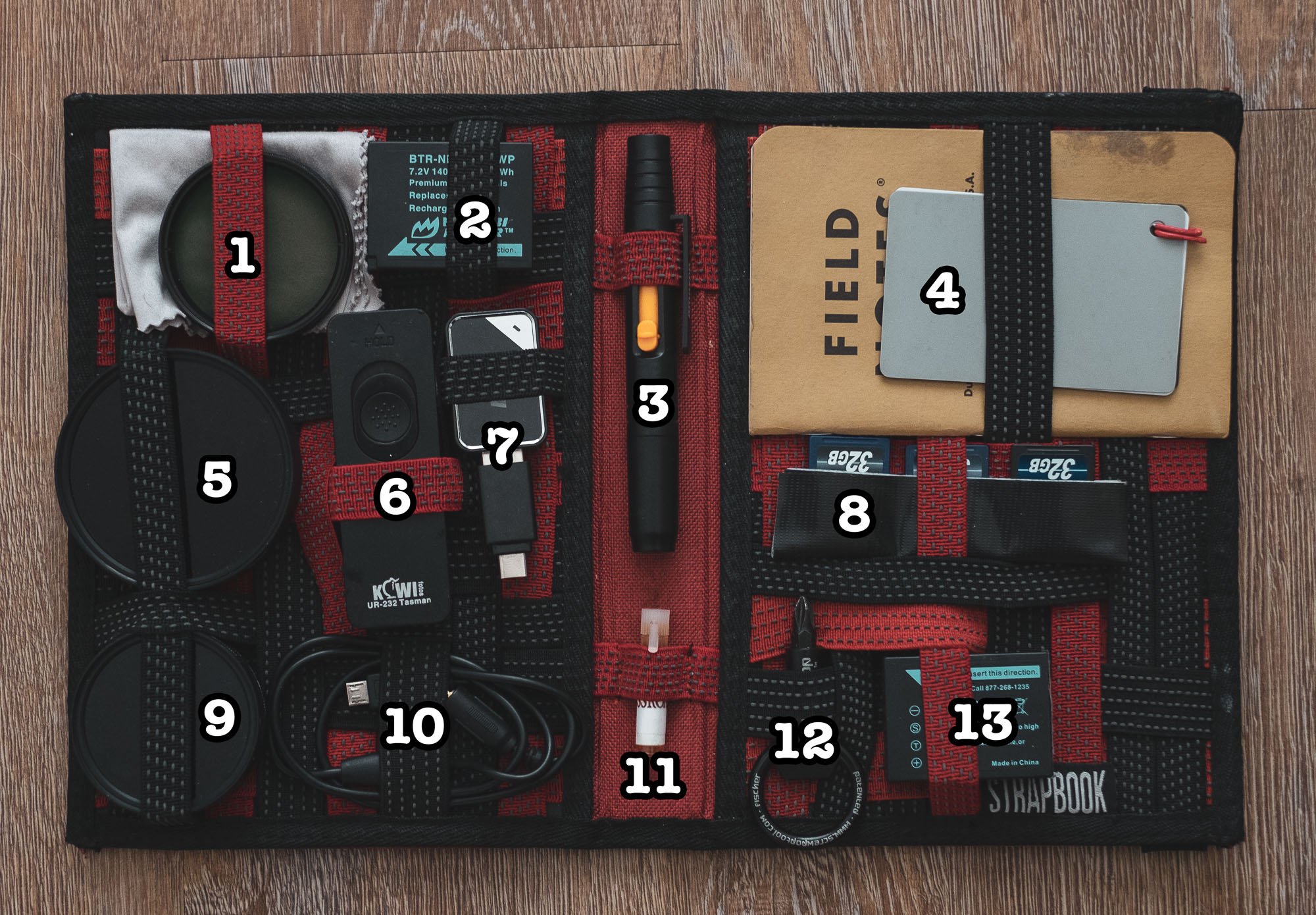 My Camera Book, meanwhile, saves me so much space in filter cases alone.[/caption] 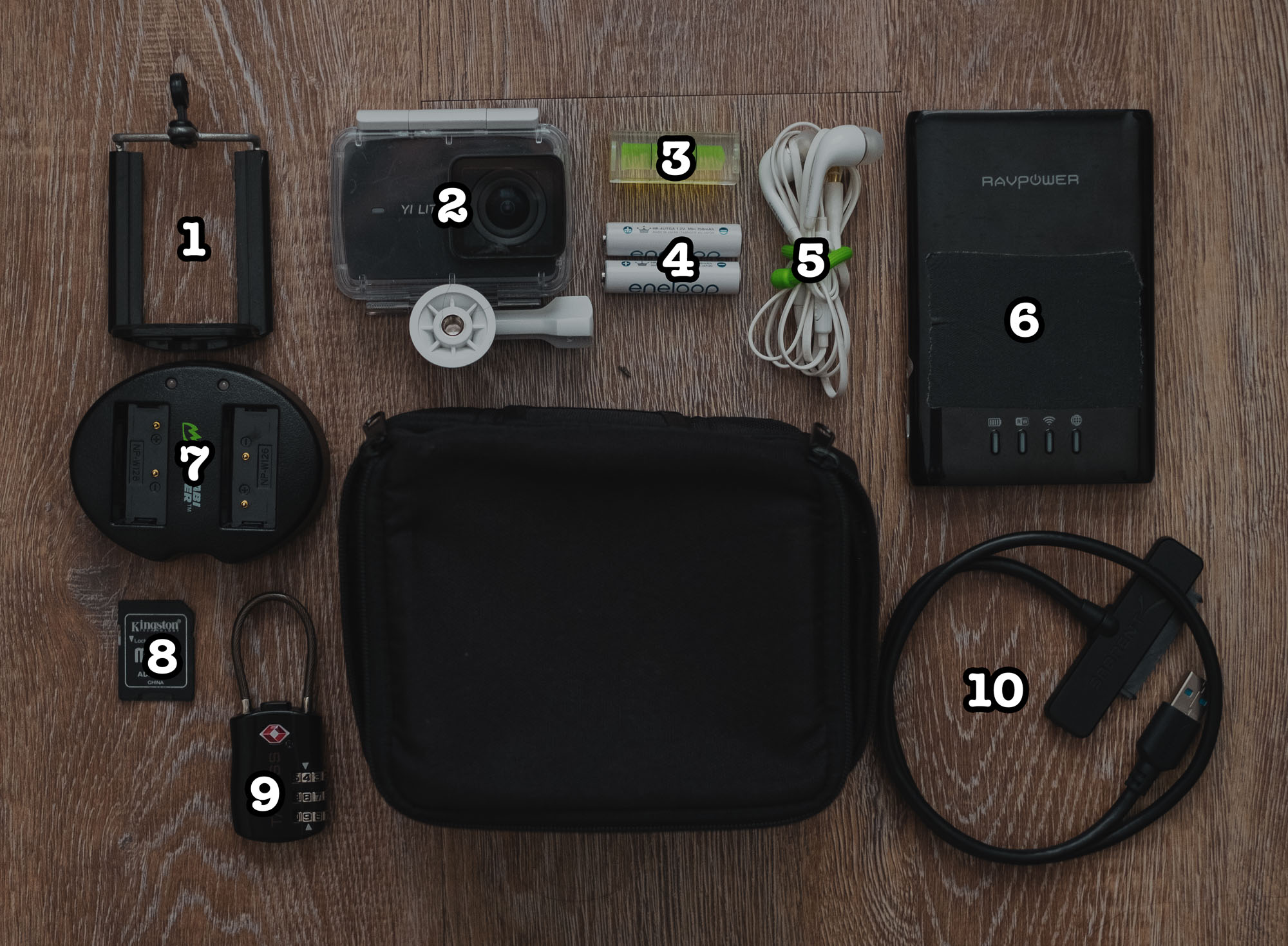 And everything else goes into the Rando Box, an old Nikon lens case bolstered with some cardboard.[/caption]

Looking at this it’s hard to believe I used to be a massive packrat, buried under a mountain of Stuff. And now I look at my two bags laid out like this, displaying the handful of items that’ll be my entire life for the next few months, and all I can think is,

To be honest, there’s a lot. I haven’t made any of the tough cuts yet because the rest of my year is going to mostly be traveling the States, spending a month or so at a time at my various stops. I’ll likely cut this down considerably at the end of the year when I flee the country. I’ll be sure to post an update when the time comes.